Tribology may be an unfamiliar word, but it’s a familiar topic. Tribologists study the interaction of sliding surfaces, specifically for friction, wear, and lubrication. Any time objects are in contact and moving, two things are happening: there is friction, and there is wear. 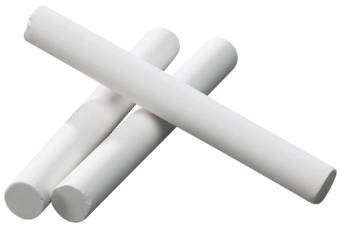 Chalk – a product designed for friction and wear

One of the simplest ways to reduce wear is to reduce the physical contact between objects; a piece of chalk lasts longer when waved through the air compared to drawing on rough concrete. To be fair, flailing about with a piece of chalk in your hand won’t make a beautiful drawing, but at least the chalk won’t get any smaller. Soft chalk rubbing on hard concrete offers a highly magnified view that exaggerates some of what is actually happening on the microscopic level between all moving surfaces.

Tiny bits of material are transferred from the soft material to the hard material, or is lost to the surroundings. This process accelerates as more load is applied, and one can imagine the consequences of running heavy-duty processes continuously, as is found in the gearbox of your machines, or between pistons and cylinders in your automobile engine.

Unfortunately for these machines, they often don’t have the option of running in air, not contacting anything. Just as the chalk in air won’t leave a mark, a gear spinning freely does not transfer torque. It would appear that the excessive wear from solid-to-solid contact is an inevitable consequence of doing work. However, there is an alternative: using liquids as lubricants.

Liquids are largely incompressible, so a force applied at one end can be transmitted through the liquid - this is the basis for how hydraulic systems work. In a well-designed gearbox, none of the gears are in direct contact with each other; a thin layer of oil separates the two gears and prevents them from ever actually touching.

This separation provides key advantages to the moving gears: greatly reduced wear, reduced friction, heat dissipation, and a less hostile environment for metal components. With the gears not actually touching, and instead transmitting force through the liquid intermediary, there is much less occasion for metal-to-metal contact of the tooth surfaces.

Oils reduce friction, however there may be an increase in drag depending on the viscosity. The liquid lubricant is also far superior at transferring heat away from the contact zone, keeping the components cooler. Oils lubricate and they also displace water to prevent rust and corrosion, keeping metal components intact and with a smoother finish for longer.

While adding a small amount of a lubricant leads to a steep drop in friction, after a certain point the extra fluid begins to increase the effective friction in the system. This effect, known as the Stribeck Effect, is amplified for higher viscosity oils and equipment moving at faster speeds. 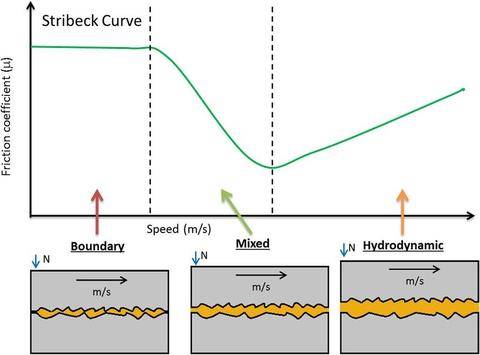 In some cases it's very helpful to send in a sample of your oil to get tested and receive a professional analysis - Up front it is important to choose the oil to meet your machines requirements. Key oil design characteristics are viscosity, operating temperature, and essentially RPM, which can be easily determined at oilviscositychart.com. And later at service intervals it is important to sample and analyze your oil which can be very indicative of remaining service life. Equipment varies, but wear byproducts show up in the analysis guiding preventative maintenance programs.

While it may not be difficult to wipe up some excess oil, it's important to use a lint-free cloth while cleaning inside mechanical equipment to avoid introducing fibers or other contaminates into the system. While some extra oil adding drag may be a problem, cloth fibers clogging an oil line is a big problem. Other solid contaminants are just as problematic, keep it as clean as possible.

As always, be responsible and recycle your oil. Check out Napa's guide on disposing & recycling of used oil for some best practices and helpful tips