Nearly every shaft diameter has a corresponding standard keyway width and depth. While a designer is free to specify any keyway they wish, straying from the standard option is likely to increase the cost, time, and complexity of the part. Many keyways are milled directly into a shaft or broached into the corresponding bored holes. Changing the width and depth of a milled keyway is straightforward, but much less so when broaching. 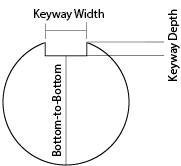 We built a calculator to determine the standard keyway based on your shaft diameter, either in inches or millimeters.

There's always the option of increasing the width of the keyway beyond the width of the end mill. In theory, a small end mill is capable of cutting every keyway larger than itself. However, this quickly becomes costly and inefficient as the smaller cutter will take longer and be more liable to breaking than an appropriately sized alternative.

While a small end mill can cut any keyway into the outer diameter of a shaft, the story gets more complicated when one considers the mating surface: a keyway on the inner diameter of a bore. These keyways are often cut via broaching, which uses a specialized cutter that passes through the bore and takes incremental cuts along its path. These small cuts are typically the width of the cutter and gradually get deeper into the base material. While a broach could be ground down to reduce its width, the process is both time-consuming and permanently alters the tool. And special tooling comes with a special price. There are two other ways to make ID keyway slots, using a shaper and EDM. 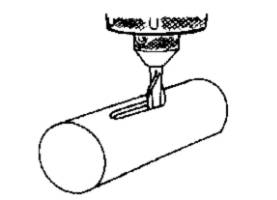 Caption for above graphic

The depth of a keyway can be more forgiving, both on the shaft and inside the bore. Increasing the depth of a milling cutter is a trivial exercise, and multiple steps can hone in directly to the required depth. The depth of a broached keyway is moderately more challenging, and will typically involve the use of shims to shift the broach further from the center of the bore. The broaching process may involve multiple passes to avoid cutting to final depth all at once. Cutting too deeply can:

Shimming becomes increasingly common as the depth and width of the keyway increase. Intuitively, this makes sense since the greater the removed material, the more difficult it will be. Custom shims are also much easier to manufacture (or improvise) than a custom broach or a custom bushing.

Bushings, which are to guide the broach through its cut, are often only available in the standard sizes. Depending on the size of the bore, only a couple (and often only one) bushing will be available. The lack of bushings determines which broaches can be used, and what keyway width is achievable. 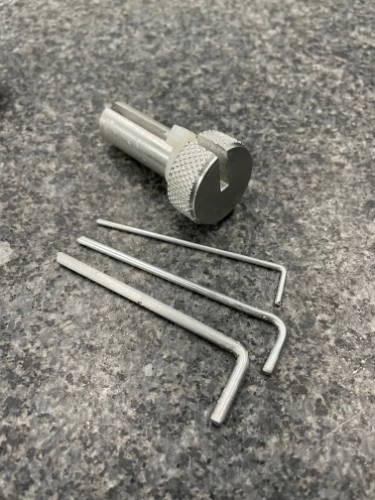 Sticking with the Standard Option

All of this complexity: elaborate milling routines, grinding broaches to fit, and fabricating custom bushings and shims, can be avoided by simply choosing the standard keyway for ones shaft. Of course, the standards are different depending on whether you’re working in inch or metric units, but two competing standards are still better than the alternative.

Adding additional shims can increase the depth of a broached cut

These alternate process work well, but may not be in your machine shop