Gears are everywhere: your car has many in the transmission, engine, rear end, and other mechanisms, your old mechanical electric meter has a watch-like gear-train to keep track of the electricity you used each month, bicycles have chains and the sprockets are a special form of a gear and the list goes on. Frequently the gears are hidden from view for lubrication, safety and other reasons. To the untrained eye, they are just gears, but there is an accumulation of innovation in geometry, materials, engineering, vibration, lubrication and much more to design the modern gear. The modern world demands transmissions full of gears to be lighter, quieter, smaller, more reliable and less expensive than their previous models.

What is Gear Hobbing?

The vast majority of gears are made with the hobbing process as it is very efficient and inexpensive compared to other methods. A gear starts out like a donut of metal, called a gear blank. The cutting tool is called a hob and it removes the material in between the gear teeth. A hobbing machine holds the gear blank and the hob in the correct geometry and for every rotation of the gear blank, the hob must rotate X times to make an X-Tooth gear. The hob passes across the face of the gear blank removing material while both are turning.

Mr. Christian Schiele, of Lancaster, England recorded British patent number 2896 in December of 1856. The work made quiet history as the first gear hobbing machine patent. If you read the patent it looks like the hobbing machine was added at the end, sort of a bolt-on section; a last-minute edit. The hobbing process for making gears is still used today and the vast majority of industrial gears are still made in this manner.

Early machinery was typically built to be bench-top sized, or small "parlor-style" machines with wooden legs like ornate parlor furniture. Later, as more horsepower became available to machinery and forces increased, so too did the need for rigidity. Machine builders quickly changed designs from ornate and almost dainty wood to large and robust cast iron. 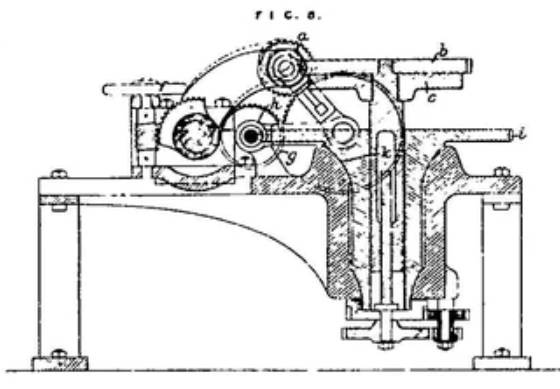 The patent drawing on Sheet 2 clearly shows a gear hobbing machine design much more rigid than a parlor chair with four angle-iron legs bolted to the floor with a large wheel in the middle. But while Schiele’s machine has surpassed the limitations of parlor-style, the design is still a long way from the rigidity one would expect from a modern machine. More importantly, the drawing shows a hob and all the parts of a functional hobbing machine.

The patent claims the machine can make gear teeth on “toothed wheels” (spur gears) and “oblique wheels” (bevel gears). Robert Hermann Pfauter, who dominated the gear manufacturing market with his universal hobbing machine in the early 1900s, would openly refer to Schiele’s patent as the first patent for a hobbing machine. Sadly, the drawing is all that we have from Schiele’s efforts as no prototype or physical relic exists.

Schiele was living in Lancaster when he submitted the patent, but he was originally from Frankfort, Germany. Records indicate he had arrived as early as 1847, nine years prior to recording his hobbing machine patent. Apparently, he had come to Great Britain to be a part of the industrial revolution and "collect patents." In that regard, he succeeded as a copious inventor and was granted over a dozen patents spanning mechanical topics from pumps and fans to engines and ventilators. 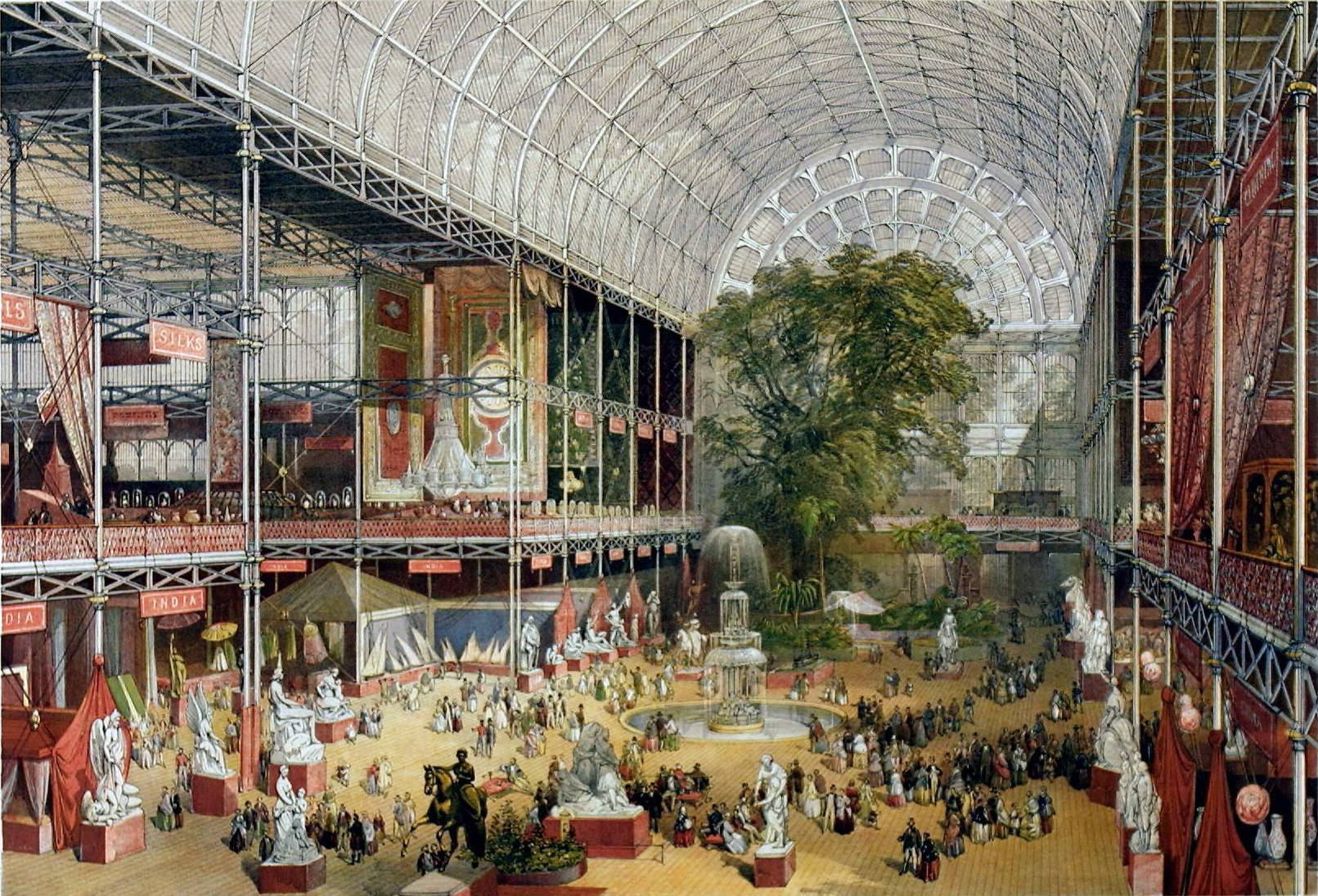 As a bustling entrepreneur, he had a machine shop full of water pumps and other jobs to fund his patent collecting. His interest in technology spurred him to present at the Great Exhibition of the Works of Industry of All Nations (Great Exhibition) held in London's Hyde Park in 1851 where he may have seen Prince Albert and most certainly experienced the Crystal Palace. A few years later he presented at The French Exposition Universelle held on the Champs-Élysées, Paris in 1855. He was in rare mechanical engineering company at both events where Joseph Whitworth, famous for standardizing screw threads, also presented. Whitworth specialized in threads, Schiele in gears. The men's amicable relationship is known and referenced by the historian Robert Woodbury.

In the end, Schiele could not convert the Patent to a physical machine or monetize the idea. He declared bankruptcy in 1865 and returned to Germany where he died in 1869. 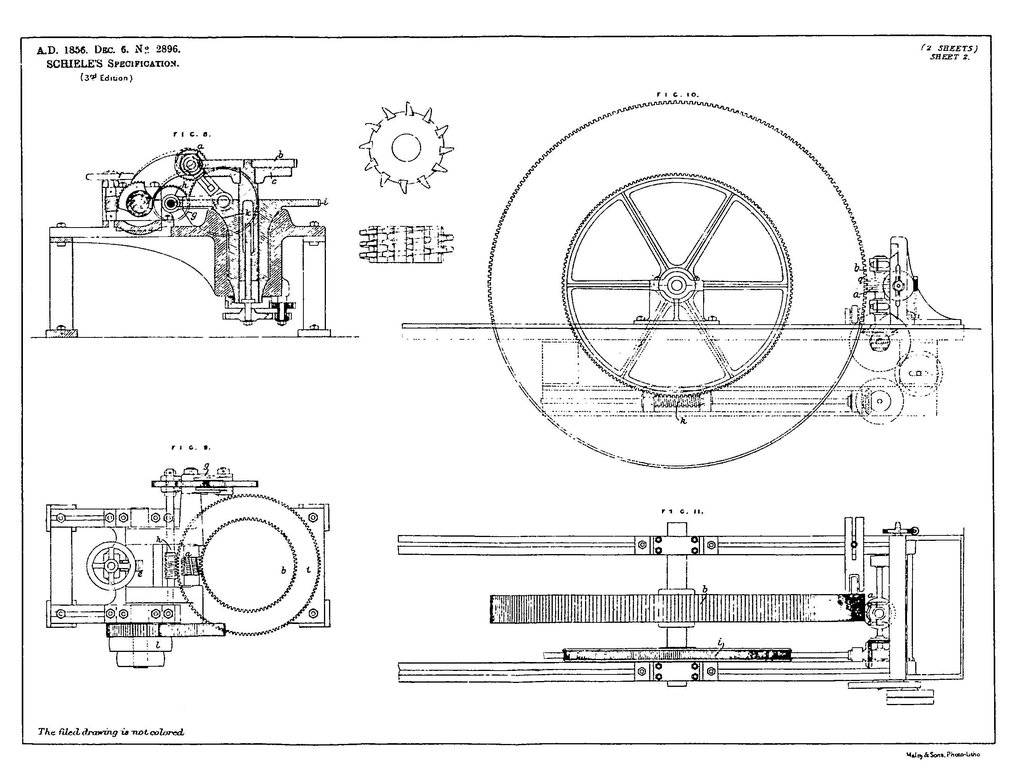 Sheet 2 from Schiele's 1856 patent. Thanks to the help of Rupert Lee of THE BRITISH LIBRARY for this drawing, April 2019

The "cutter" as Schiele calls it is called a "hob" in modern terms today. Although it is shown on Sheet 2 it does not get a Figure number or even a letter callout like 'a' or 'b'. Plus it gets little attention in the patent, maybe only one sentence. As we know today, the hob carries the DNA of a modern gear tooth geometry. It is called the Involute shape and it has a very special quality.

The most prominent early hobbing machine tool builder was Hermann Pfauter. In his book, Hermann gives full credit to Schiele for his patent as prior art. [5] The Pfauter patent appeared 31 years after the passing of Schiele. Part of Pfauter's resume included work at the Reinecker factory where manual and one-gear only hobbing machines existed to make gears for their grinding machines. The hobbing and grinding process knowledge served Hermann well in machine tool building and in his equally amazing hobb cutting tools. 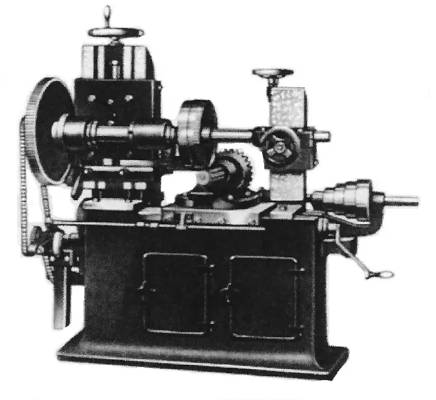 Hermann significantly progressed the hobbing machine to be more universal and make gears of any tooth count, spur and helical gears, as well as worm gears. The true love of his work shows in the craftsmanship of his machines. He had aspirations to sell machines in the United States, but his untimely death shifted the dream to a future generation. His son Herman Pfauter created Pfauter-American and was making great progress in the 70's before catching the eye of Gleason Corporation. Gleason, based in Rochester, NY, is best known for their bevel gear machines and cutting tool technology. 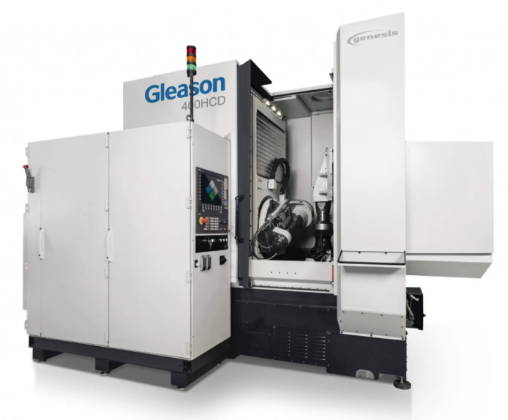 Gleason is one of those companies that is proud of their history and the acquisition of Pfauter was like a marriage of two families much more than a corporate takeover. Technology, automation, a long history of innovation, high quality machinery and tooling comes from Gleason this day.

6) With the assistance of Graham Hicks of Ancestral Stories, Spring 2020